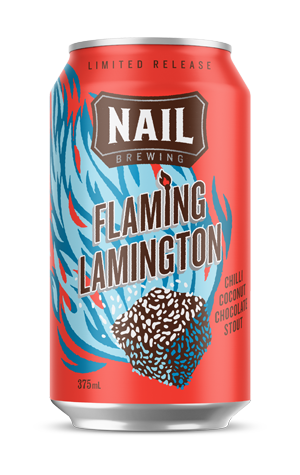 Lord Lamington, or his chef, Armand Galland, birthed the eponymous treat back in the late 1800s, which raises an odd thought: just who would have been rolling vanilla sponge cake squares in molten chocolate, then desiccated coconut – an ingredient for which we have the chef’s Tahitian wife to thank – in Brisbane back then?

Years ahead of the pastry curves when it first appeared, Nail’s 2015 liquid ode to the cocoa-choc cubes pimped the icon with the addition of bird's eye chilis, for reasons known only to brewing company owner John Stallwood. Flaming Lamington quickly became an unlikely icon, and six years on, finds itself in cans, replete with Zendoke’s mischievous blue flames.

As with previous releases, the classic oatmeal stout underpinning proceedings carries creamy coconut and milk chocolate, with bright yet round chili heat arriving mid-palate before a dry close. Flaming Lamington comes with a moderate ABV, presenting something of an achievable evening’s work for fans, in contrast to many of its dessert-inspired cohort.