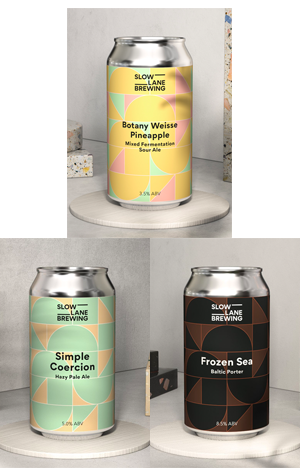 The city may be under a collective depression, but that won’t stop Sydney’s Slow Lane from releasing a cavalcade of delicious beers from their Botany home [A name change for the brewery might be in order at this rate – Editor]. This three-part release includes a new variant of a favourite, a not so simple, on-trend hazy pale ale, and a season appropriate Baltic porter.

Slow Lane’s Botany Weisse is likely one of the only traditionally brewed Berliner Weisse in the country. Probably because the traditional method (much like a lot of the old school German brewing techniques) sounds like a right pain in the arse. Following from the mango and passionfruit and apricot Berliners of 2020, the latest addition to the fruit family is pineapple.

It’s hard to imagine anyone bothering to spend more than seven months brewing a 3.5 percent ABV fruited sour [OK, they can keep their name – Editor] and yet head brewer Alex persists – and bless him for doing so. Certain strains of Brettanomyces tend to throw off a lot of pineapple so combining a six-month secondary Brett fermentation with a month on pineapple delivers a veritable smorgasbord of pineapple expression. The initial impression is similar to skinning a ripe pineapple. Looking like pale pineapple juice, there’s an earthiness like fruit skin and, as expected, pineapple galore. Juicy juice on the palate with a bright lacto-acidity and delicate wheat malt base. Botany Weisse Pineapple is intensely refreshing and just a joy to drink all the way through. Would be a spectacular tin with some fish and chips at the beach. Did I mention that it tastes a lot like pineapple?

Simple Coercion is not Slow Lane’s first hazy pale ale but it is the first beer to be labelled as such. For people with unnecessarily strong opinions on beer styles (like me), hazies are their best at around 5 percent ABV, especially those on the lower end of the IBU spectrum. In true Slow Lane fashion, even a modern New World style like a hazy pale ale that’s hopped with Simcoe and fermented with two different US hazy yeast strains ends up as a showcase for malt and yeast esters. The Simcoe provides plenty of grapefruit and woody pine, but the stage is equally shared with pear-like esters. The use of flaked wheat, oats and chit malt lends a green, grassy malt flavour without any cloying sweetness and a full mouthfeel that’s moderately bitter compared to others of its ilk.

Finally, we have yet another true Slow Lane interpretation on a classic European style, Frozen Sea. In the mid to late 18th century, English porter was being exported to all corners of the globe but, in particular, huge quantities were being sent to mainland Europe. Thanks in part to Napoleon’s continental blockade in the early 19th century, the countries around the Baltic Sea rushed to brew their own version of porter in the hope of replacing the beloved brown brew from England.

The enduring Baltic porter style is a big, rich and malt driven beer not too dissimilar to an English imperial stout that’s been fermented with a lager yeast. Slow Lane’s take clocks in at 8.5 percent ABV, utilises eight different base and specialty malts, and has been fermented with a German lager strain. Pouring a deep murky brown with coppery edges and a lush tan head, Frozen Sea throws off classic German lagery esters akin to that of a Schwarzbier. With a Baltic porter, it’s all about the malt, however, and this bad boy delivers in spades. Bitter coffee, dark cacao highlights with a doughy caramel sweetness, dark fruit and alcohol warmth. For all that, however, there’s a smooth and crisp finish with a delightful herbal bitterness. Absolutely gorgeous stuff.

Save 10% At Slow Lane's Online Store