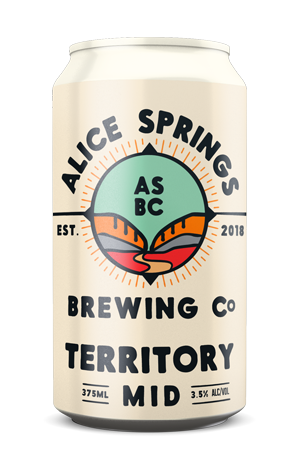 Alongside the Centralian Ale, the beer in the Alice Springs lineup most attuned to traditional drinking habits in the NT is this mid-strength lager that even takes the region's name. It's a collab with two of the state's other three breweries (at time of writing – there are more a-coming...), Beaver and Purple Mango, with each brewing to the same recipe and selling it under their own branding.

Considering the challenges inherent in brewing a clean lager on a craft scale, let alone one at 3.5 percent ABV on a couple of Braumeisters, it's a well-tuned little number. And given the vast volume of Great Northern mid and XXXX Gold consumed in the NT (judging by campsite recycling bins), one assumes it's been worth the effort getting it right.

Malt driven and bright as a tack, it packs a little more character than its big brand brethren – whether you judge that by malt flavours, structure or bitterness. The last of these is derived from Enigma and Galaxy hops, albeit used more for their bite than their fruitiness. The sort of beer you'll want to pack by the case when on a road trip in this magical place.