Beer Tumut River Brewing With Or Without You, Bert’s Honey & You Am IPA 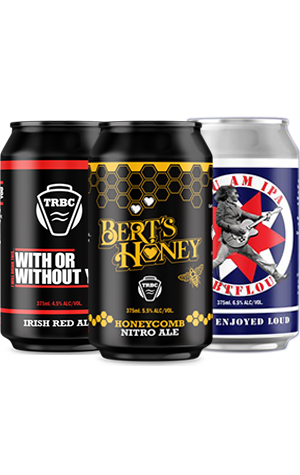 There's some rhythm and rhyme running to these three tins from Tumut River Brewing and what better way to greet lockdowns in three cities with some music blasting? The NSW brewery first made With Or Without You (or a version of it) when they opened in 2012, and they haven’t stopped revisiting it since. With three red malts bringing the colour - Redback, Aurora and Shepherd's Delight - this Irish red shines like rust at sunset. It smells of golden syrup spread on wholewheat crackers with just a touch of fruity esters, easing off to a more subtle sweetness in the mouth and finishing dry. As for the music: I counted ten references to U2 on the label. If that isn’t pushing it to The Edge, I don’t know what is.

Brewed to celebrate brewer Bert’s wedding, Bert’s Honey might not be directly connected to a band but how often does U2 get played at weddings? It's a beer that deserves to be called mellifluous (even if it is a bit of a fancy word) and fits such an occasion too. While toffee malt, local honey and milk chocolate were all put into the melting pot to simulate a honeycomb chocolate bar, my point of reference was more like one of those sherbet lollipops shaped like a UFO. The creamy body brought a wonderful floral sweetness to bear, and when I was finished - all too soon - I noticed the silky nitro head had left lacing all the way up the glass to remind me what I’d just had. Not that I’m likely to forget any time soon.

Pale gold and bright as a spotlight, You Am IPA is a shining example of a drinkable IPA and a collaboration with the band ahead of Winter Bites Festival in Batlow (which has been postponed until November). Fruit blossoms on the nose open right up to tropical fruit in the mouth - think ripe mango, rockmelon and pawpaw - and florals that have become sticky and sweet, gathering like nectar on your tongue. As the beer warms, silky coconutty hop character emerges to join the other flavours. While there’s a little bitterness there, it’s balanced by the malt that brings a sweetness and medium body yet somehow still finishes clean, clean, clean.

(If you were waiting for some musical references here, I have to apologise - I know next to nothing about You Am I. And while ignorance doesn’t usually stop me, I figured there’s a first time for everything.) (Start with Hi Fi Way, you'll never look back - Editor)