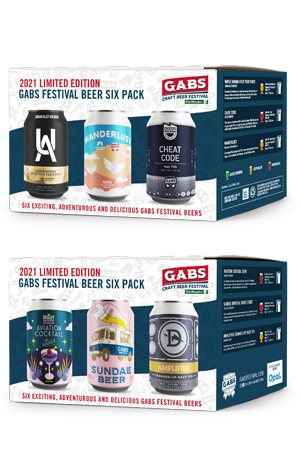 GABS might be over for another year, but the party lives on in the mixed packs they've put together for Dan Murphy's. It has to be said the six beers inside for 2021 are a pretty good microcosm of where the festival beers sit these days too, covering hops, haze, dessert, high ABVs and odd colours.

Starting with my pick of the six and it's Mountain Culture's Wanderlust. Sure, a 7 percent ABV NEIPA from a brewery that specialises in such beers isn't that out there and GABSy, but for pure drinking pleasure it hits the spot. It looks like a NEIPA, smells like a most appealing NEIPA – a lovely stonefruit-laced, soft-sponge-as-beer aromas with lashings of soft, creamy tropical hops thru its midst and a just a hint of bitterness.

Also playing in hazy territory are Dainton with Amplifier, a hazy IPA brewed with exuberant hop varieties Citra, Mosaic, Sabro and Strata. Sticky citrus rind aromas greet you, accompanied by the syrup from a tin of fruit slices and some grassier “hop matter” characters. There's little that’s obviously malt-derived, more a case of rich, sticky fruits and a kick of boozy warmth.

Completing the IPA entries is Deeds Brewing's Cheat Code, a 10 percent ABV triple IPA brewed with nothing but Citra hops. On the nose, it reminds me of meringue sprinkled with flecks of lemony citrus. Softer than it ought to be, less warming than it might be, and low in bitterness too. Look out!

It wouldn't be right for a GABS pack in 2021 not to feature a beer of odd plumage, and Bright fill that niche with their Aviator Cocktail Sour, a collab with Reed & Co Distillery that gets its violet meets chinotto hue from locally foraged pea-flowers. There's no head to speak of atop a beer in which you'll find a kinda herbal anise and berries thing going on, a hint of herbal sourness that hints at smoke, and a touch of sweet acidity. A million miles from beer, but enjoyable nonetheless.

Heading into dessert territory and you have Urban Alley's Maple Banana Split Your Pants, a dunkelweiss with added maple syrup. I picked up hints of Oud Bruin-esque vinousness on the nose, which distracts a little from the choc-banana swirl beneath, while the intense chocolate flavours (with that banana still there too) careen straight through Maple Town and towards Molasses Central.

As for Sealegs' Sundae Beer, I'm not sure mine presented as it should. The nitro shot in the ice cream sundae-inspired imperial stout brewed with chocolate, caramel, coffee, peanut butter, berries and vanilla didn't do its inverted cascading bubbles show or form the typical nitro head. Instead, you have something that looks more like prune juice not just due to the colour and texture but also the negligible carbonation. There's sweet and creamy vanilla and caramel, a touch of tang from the fruit, and a little grippy hop bitterness but it's not overly sundae like, so I suspect the lack of nitro action may have undermined its delivery.

NB If you're wondering why this is listed on Bright and Dainton's pages, they're the first two breweries alphabetically that are listed on our site.