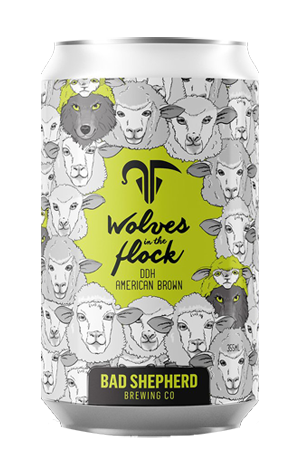 The saying goes that too many cooks spoil the broth. So, what happens when a brewery invites ten of their biggest fans to get involved in designing and brewing a beer? Let's find out, shall we?

Because that's the case with Wolves In The Flock, for which Andrew Bishop, Jake Neasey, Anya Shindler, Kris Kristinsson, Clint Bee, Louis Willcock, Daniel Brady, Luke Gilchrist, Gary Moller and Matthew Mann joined the brewers to create a limited release beer. The chosen style was a DDH American brown ale and the beer got off to a good start at Crafty Towers as, once it dropped into my glass, I was inspired to pump Mahogany Roots through the speakers and take myself back to sweaty mid-90s all-nighters.

It continued well too, as, while the label talks about pine, I found myself enjoying Jaffa orange hops melding with sweet, dusty cocoa and rich biscuity malts in a kind of choc-orange-slice-in-a-glass manner, albeit less heavy than that might sound. As their 2021 AIBAs showing suggested, Bad Shepherd tend to excel with their dark beers and this is as well made a limited release as I’ve had from them in a while, one with flavours you want to linger and that, thankfully, do.