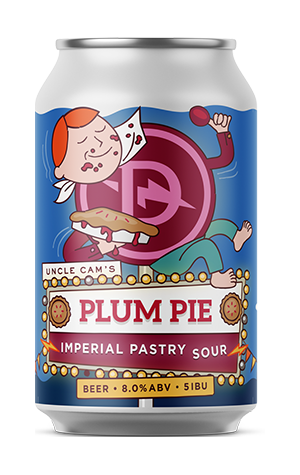 Just a couple of weeks on from bringing out a chocolate pretzel stout, Dainton are back seeing what sweet treats they can transport into beer with the imperial pastry sour, Plum Pie. Is plum juice a thing? Assuming it is, then the beer certainly looks like how plum juice should look, pouring the same purple colour Dainton have switched their logo to on the cartooned can.

Not only have I never drunk plum juice but I'm not sure I've actually eaten a plum pie but assuming they tend to be loaded with a pantry's worth of spices then this beer seems to be a faithful interpretation. It's hard to exactly work out what's in there (which is arguably a complement to any baker or brewer) but it includes cloves, star anise, and the faintest of hint of cinnamon and while the inclusion of lactose gives the beer a thick mouthfeel and quite a bit of sweetness, the plum adds a drying tartness just as plum juice should. Assuming it's a thing...