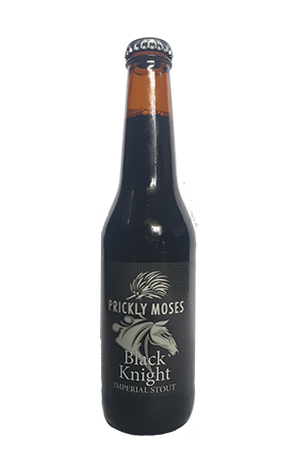 Black Knight is a regular winter release from Prickly Moses and while winter setting in might not bring cheer to everyone, the imperial stout is one thing many fans of the Otways' brewery do look forward to as the days shorten. It's not just fans and locals that have grown appreciative of the beer either but judges at the Australian International Beer Awards too, who gave the beer a gold medal in 2021.

We can't pretend to speak for those judges - or anyone else for that matter - but what was likely enjoyed was the 7.8 percent ABV beer's balanced and complex profile. It might have less alcohol than some imperial stouts and it hasn't seen the inside of a barrel either but Black Knight is still incredibly velvety, smooth and filled with rich and complimentary notes of caramel, chocolate and a touch of sweetness from the booze that's almost like fortified wine. It's not all sweet flavours though, with the balance come from the beer's roasted backbone that provides an air of tobacco and freshly ground espresso.