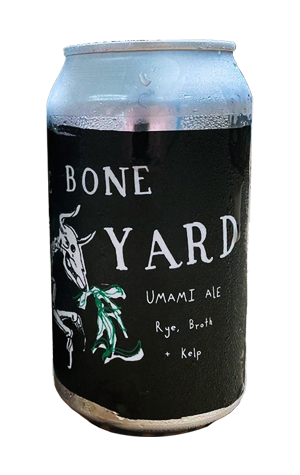 Melbourne specialist butcher and wine merchants Meatsmith have a close relationship with East Gippsland brewers Sailors Grave and, for Good Beer Week 2021, hosted an event together called The Bone Yard. The name has also been given to their first collab, a beer featuring some of Meatsmith's brother as well as kelp (so, not one for vegetarians), making it the second "meat beer" we've featured on the site in one month, following Willie The Boatman's lamb souva beer that debuted at GABS.

Here the beer has been tagged an "umami ale", but it's arguably the rye malt in the mix that colours the experience more than the more unusual ingredients. I reckon it sits somewhere in Germany (well, they do love their meat there) – in a spot between dunkelweiss and altbier. There's a toffee-laced, nutty, rye-spiced sweetness, some wheat beer like esters and a toasted edge to the malts too, making for the sort of beer that should sit snugly next to a dish from Meatsmith.