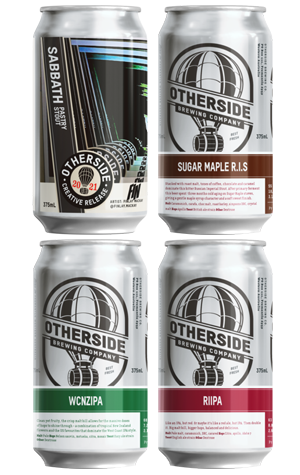 One of them is the latest appearance for a beer with a considerable cult following, so much so it could be released during a February heatwave and likely still be voraciously consumed. Sabbath started as a stout that was pastry. The following year it was a pastry stout that seemed closer to stout. And, for its third annual outing, Sabbath 2021 owns its intention, swirling with layered Jersey caramel fudge, hedgehog slice (sans coconut), vanilla soft serve, Ferrero Rocher and Bourneville hints before proving not all pastry stouts need an insulin pairing as the creamy palate resolves dry.

WCNZIPA arrives equally as a frustratingly vowel-limited Scrabble draw and the latest in Otherside’s Juicy West Coast elan. Veiled IBUs and booze, a generous mellow mist, and masses of NZ tropical hop greenness create something juicy, bitter and crisp – just the way Otherside like their IPAs.

Which leaves RIIPA, which is hardly an afterthought. Its dark caramel and toffee malt body leads with subtle resin, slight alcohol warmth and a quiet bitterness, finishing dry. It’s not Double Harvest, nor Redliner, this RIIPA has its own appeal. That said, fans of those beers will be pleased too.