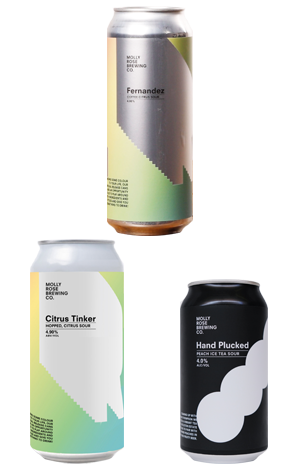 The limited releases can come so thick and fast from Molly Rose it takes a bit of effort to work out how best to serve them up on the site in digestible portions. So, while the brewery might view this trio differently – the 500ml cans feature the house mixed culture; the smaller one is a straight Philly Sour pitch – we're going to clump them together under the "sessionable sour" category.

Fernandez joins their growing line of coffee citrus sours, and spritzy as beers for that matter. There's an almost cocktail like intensity to the nose – coffee of the cascara / green bean kind, and sharp, limey citrus aromas – which lead you into a beer with a crisply acidic, mouth-watering edge. It's rather peachy when put to the belch test too, for those interested in such measures.

Citrus Tinker is my pick of the half dozen limiteds to leave the brewpub in April / May. It's not the most complex of them, but scores high on pure drinkability. The beer requires a slow, delicate pour as it’s a feisty one even by Molly Rose's mixed fermentation standards, before revealing itself as lean, driven by freshly squeezed lemon and lime. Imagine an isotonic sports drink and a Belgian quencher had a kid.

Speaking of thirst quenchers, Hand Plucked is up there as well. The peach ice tea sour is a collaboration between the brewery and the tea sellers at Larsen & Thompson, who chose a tea from the Castleton Estate in Darjeeling for a beer also made with fresh peaches. It's is just as refreshing as you want an iced tea to be on a hot day, while the tartness from the peach are so present it's a bit like really sucking on the fruit's stone for some time after it's done. The tea notes are softer but add to the beer's overall mellow nature, and infuse just a touch of bitterness to what's otherwise a very soft affair.