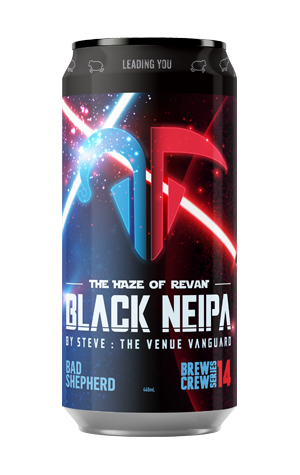 Of all the four million beers I've sampled since leaping aboard the roller-coaster marked The Crafty Pint, I can't say I recall trying a black NEIPA. Or a red or brown one (well, other than all the oxidised ones) for that matter, which seems a little odd in this climate of anything goes. Here to fix the situation is Steve, "Venue Vanguard" at Bad Shepherd, with their 14th Brew Crew release, one that mixes cloudiness, specialty malts and a quintet of US hops.

It has a gravy-esque appearance when leaving the can for your glass (maybe a reason why there haven't been too many?) before its aromas bring to mind many of the unlikely bedfellows inherent in black IPAs: some fruity, citrusy hops taken into dark berry and vaguely herbal territory by the darker malts, which also bring the bitter dark chocolate. This edge to the dark malts make The Haze Of Revan less perceptibly soft, more bitter than common or garden NEIPAs even at a relatively steady 30 IBUs.

Maybe it's down to the appearance of the pour, but I picked up (or imagined) a savoury / umami edge to proceedings like those sometimes found in stouts. As for the label artwork, there's a Star Wars meets The Avalanches vibe – and the beer inside has as much to unpick as you'd expect from such an unlikely collision.