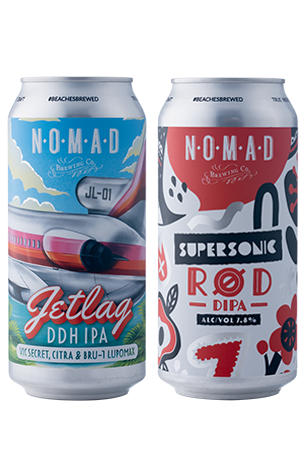 In these here days of haze, Nomad have released Jetlag-01 with the following announcement: "Jetlag is undergoing an evolution that will see it modernise and develop into a DDH IPA series."

It was an announcement that was mixed with mixed feelings from drinkers; the core range Jetlag IPA had its fans and though craft beer drinkers pride themselves on a love of finding the new, we can all be a little adverse to change. The first instalment in the series is a fair change too, featuring a hop combo of Vic Secret, Citra, and Bru-1 Lupomax. The amount of haze is insane - it looks like what I imagine pineapple milk looks like. (Yes, that does exist. If this is the first time you're hearing this, take a moment to let it sink in.) The three hop varieties weave together to make a thick tropical punch, with only the Bru-1 poking through with individual notes of pineapple but with no aroma or flavour of milk, thankfully.

The latest entry in Nomad's Supersonic IIPA series, Rød, doesn’t showcase any fruit as many of the entries do; instead, its crowning jewel is Norwegian farmhouse yeast. But if there were a fruit that tasted like this beer, I would eat that fruit.

It’s difficult to pick apart this beer to determine exactly where some of the flavours are coming from, but between the malt, the hops, and the yeast, there’s a lot going on. The explosive sweetness of caramelising fruit as you stir a big pot of strawberry and rhubarb jam, having decided to use orange peel instead of lemon to help it set. (Yeah that's right, I know something about jam making - form an orderly queue.) A homemade kombucha that allows the earthiness of the black tea to remain even while the berry juiciness and floral flavours explore each corner of your mouth. A chewiness that leads upfront, a bitterness that sizzles in the back, and a general wonderment that hangs around long after the last sip is gone.