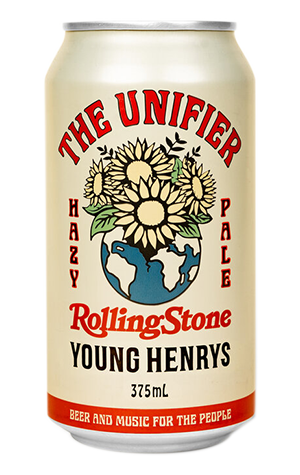 "It's no secret that the Young Henrys family is made up of dyed-in-the-wool music lovers who embrace all that music is, was and represents within society and culture. So, we made a beer with Rolling Stone that honours that sentiment."

Is it any surprise that Rolling Stone’s first co-branded collaboration with an Aussie craft brewery is with Young Henrys? Not at all.

Meet The Unifier - a hazy pale that brings together tropical fruits, clean stonefruit, and fresh floral notes. While it’s light in the mouth, there’s enough malt character to carry the flavours well, and a mix of malted and rolled oats filling out the body for that rolls-over-your-tongue feel.

But the idea behind The Unifier is bigger than the beer itself. Rolling Stone have put together a history of how music has been used through the decades to protest injustice, heal divides and bring people together. Together with Young Henrys and a bunch of musicians, they invite you to be a part of history by joining with them in supporting three organisations - Support Act, the Dylan Alcott Foundation, and Autism Camp Australia. A percentage of proceeds from The Unifier will go towards these three organisations, so drink up to be part of the movement.