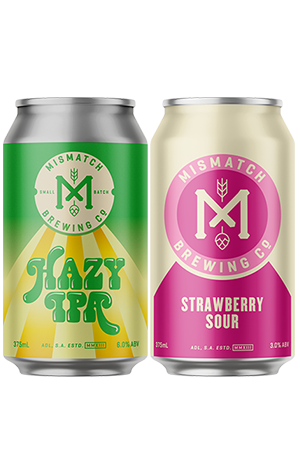 South Australia’s Mismatch Brewing have two returning beers out in tins for April 2021. Well, in the case of one of them, it’s not quite a returning beer and more a variation on a theme, with Hazy IPA following a similar release in 2020. The idea for the IPA series is to let Mismatch's brewers explore different ingredients, alcohol levels and tweak other aspects of the recipe, with Batch 2 coming in at 6 percent ABV and using Galaxy, Sabro, Citra plus experimental Kiwi hop NZ-107. Pouring a very pale yellow and completely opaque, Hazy IPA Mk II features similar distinct lemon and lime notes to Mk I, though that flavour is soon joined by a big hit of passionfruit, pineapple and very pulpy orange juice. There's a slight hint of mint and coconut in there too thanks to Sabro and, while that might all sound like it could be too many flavours competing against one another, instead they rest lightly together and blend into one.

Strawberry Sour is a beer that's also been brewed before at Mismatch with the kettle sour made with strawberries from Aston Valley Fresh – another member of the Lot 100 group of businesses of which Mismatch are part. The beer may use fresh berries but you wouldn't know it from staring it down in the glass, with the pale and yellow beer looking more like an unfiltered lager than a modern fruit kettle sour. The sourness isn't overbearing and instead provides a soft, tart base from which the fresh strawberries rise. The best way to describe how those strawberries taste is to consider buying habits: you grab a punnet of strawberries, a few are not quite ready with the top still showing a lot of white, so you’ve got two options: eat them now while they’re slightly underripe or put them in the back of the fridge and find them in a week as a pool of mush. Here, you've taken the first option to enjoy those lightly tart, fresh fruit aromas.