Beer Hargreaves Hill Pursuit Of Hoppiness No.9 & Fruitopia No.3 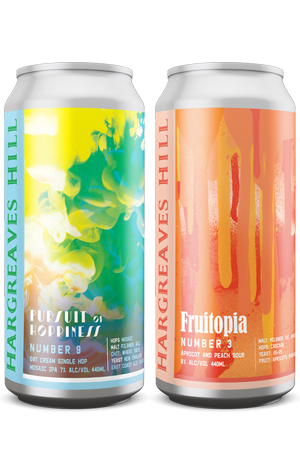 Hops – lots of them, mostly added late in the brewing process – have been the unifying factor in Hargreaves Hill's Pursuit of Hoppiness series (the clue is in the name, after all). Yet, across the eight prior releases to date, they'd touched upon a few bases, with a Cryo Oat Cream IPA – No.7 – and imperial red IPA – No.8 – probably my picks from the lineup to date. And it's in similar territory to the former they head as they close in on double figures.

Pursuit of Hoppiness No.9 is an oat cream IPA showcasing the ubiquitous Mosaic hops within a grain bill designed to be full and soft, with a lick of lactose to further round things out. The first factor you'll notice is the beer's low carbonation and loose, fast-dissipating head, which may account for it presenting with less weight and indeed creaminess then many an OCIPA (have we reached the point where we can abbreviate oat cream IPAs that way yet?). It's plenty hoppy, mainly of the orange citrus sort, while it's both a little sticky on the palate and a wee bit grippy in its aroma but, all in all, pretty easy-going and undemanding.

The brewery's other series has produced again too; Fruitopia No.3 is an imperial fruit sour featuring "a large dose of apricot and peaches". I donated a can to some mates, with the wife – rarely seen going beyond a summer ale – intrigued enough to dive in.

"This is so weird – like a fruit juice flavoured beer," was the assessment via WhatsApp.