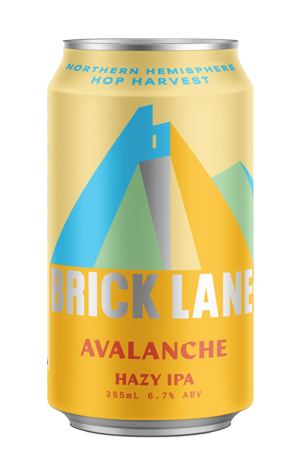 Given it took me three full weeks to stop listening to We Will Always Love You on repeat (no word of a lie – ask Mrs Pint), I'm pretty invested in anything referencing the ground-breaking Melbourne artists. Thankfully, Brick Lane's brewers are pretty invested in their Avalanche Hazy IPA series, as evidenced by their decision to host a Zoom chat to talk about their plans for the beer as number two – a showcase for freshly-landed Northern Hemisphere hops – heads out across Australia.

It was a chat that, under the guidance of head brewer Jon Seltin – a man who combines a great turn of phrase, incredible depth and breadth of knowledge, and obvious passion with an ability to create damn fine beers – went far beyond Avalanche too, touching upon the technology behind the types of hops used in the beers, the origins of the yeast they've chosen (the Nottingham ale strain), and more. A highlight was his take on why beer matters and his desire to make them approachable, whatever the style...

"Beer is about hedonistic bloody pleasure; sucking the marrow out of the bones of life. If I want to be challenged, I'll try to do a sit up."

If you choose to approach the summer 2021 version of Avalanche, you'll find one that shares many similarities with its predecessor – the same ABV, very similar malt bill, the use of Mosaic, Centennial and Citra hops – but with differences too. That trio of hops has been kept in the background, with Idaho 7 (the same hop we chose as the "star" in our Crafty Cabal relaunch beer, Disco Monks From Outer Space) to the fore. It lands a distinctive pineapple punch amid the sweetly juicy fruits in a beer with a fulsome texture and a slightly resinous bite a step or three up from the low-to-no-bitterness hazies doing the rounds in recent years.

Look out for a showcase of Southern Hemisphere hops in Mk III; as for IV, well, they haven't decided where that will land.