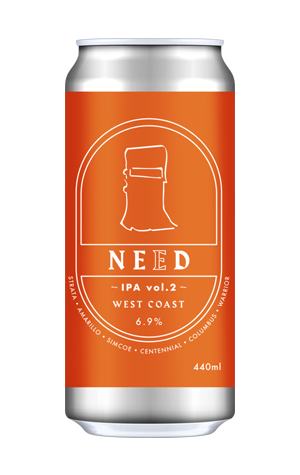 Two months after opening their NEeD IPA program with Hazy Double, Bridge Road bring the second instalment in the series with a West Coast. It’s stacked high with hops, but shares precisely zero of the varieties of the first NEeD; here, you'll find Strata, Amarillo, Simcoe, Centennial, Columbus and Warrior waiting to fill your face with lupulin.

Like many of the new wave of West Coast IPAs, it doesn’t bust your lip with a violent uppercut of hop flavour and bitterness; it’s more of a wrestle, applying pressure in just the right places until you recognise its prowess. Old school pine character is complemented not just by grapefruit as you might expect from a West Coast (if you hadn’t had one since 2016), but also by sweeter tropical fruits that level the flavour combo out into something firm yet friendly. The almost metallic [I found it quite woody – Editor] bitterness that starts to creep across the tongue and gather at the back of your mouth is just powerful enough to balance the sweetness that had begun to take hold.

The foam is low and dense like clouds promising to drop rain, while the body shows off the sunset-tinted hue of light crystal malt. Speaking of the malt, the body of this IPA manages to be simultaneously sticky and lithe. Don't ask me how it can be both. I don't have the answer for you. It’s malt wizardry.

Think pine needle tea made in a copper billy, sweetened with the syrup from half a tin of tropical fruit salad, and you're on the right track.