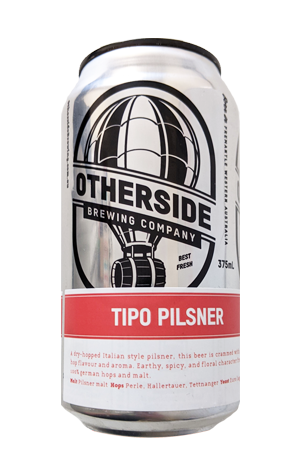 Otherside have kicked off 2021 with this tight expression of a niche beer trend, one whose origins are driven by the appreciation of a single beer, Birrifico Italiano’s Tipopils. A secret society of sorts – a cabal, if you will, of brewers – began releasing beers in its likeness over the past decade, with Firestone Walker’s Pivo Pils one of the most notable.

So, what is an Italian pilsner? In a through-the-looking-glass moment, American brewers became intrigued by the floral and earthy characteristics of classic Euro hops like Tettnanger, Hallertau and others, having focused on US bred varieties for so long. As is the US way, the stateside Italian pilsners were generously dry-hopped for style, meaning the style resembles a German pilsner with a hefty noble dry-hopping regime.

Which brings us to the Otherside. Endlessly drinkable, Tipo Pilsner is laden with floral and earthy notes, a touch of spice which dances atop a 6 percent ABV tarantella. The lasting thought as the glass emptied was that I could drink quite a few of these. Quite a few!