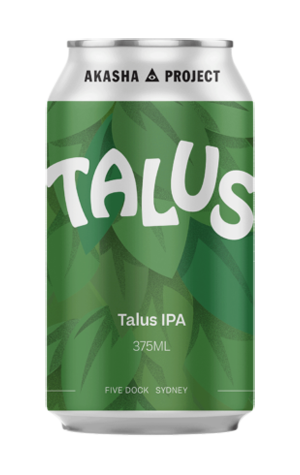 We know 2020 may have been a pretty awful year all round but, for weird beer freaks like me, at least there was an unprecedented bonanza of new hop varieties getting a full commercial release. There’s been a bumper crop coming out of the US with a lot of experimental breeding of the neomexicanus stock resulting in hops with intense and distinct aroma and flavour profiles that seem to be perfectly suited for the ongoing lust for big tropical fruit flavours.

Formally known as HBC 692 – first coming to the Crafty team's attention in this 2019 beer – Talus was officially named in August 2020 with several Australian breweries given the opportunity to put the new kid through its paces.

Akasha have continued their run of releasing single hop IPAs with new varieties and, thus, we have the Talus IPA. The marketing around Talus promises much in the way of pink grapefruit, citrus zest and pine so, does it deliver?

Yes. Yes, it really does. For me at least, I found a combination of grapefruit citrus, juicy lychee and resinous pine with some floral overtones purely on the nose [Others in the Crafty team picked up a rosewater quality too – Editor]. Talus works wonderfully in a West Coast IPA with all that bitter citrus and dank earthiness. The grapefruit and pine means this is almost a re-imagining of the classic first American IPAs using Cascade, however with a more modern, restrained malt base than the days of yore.