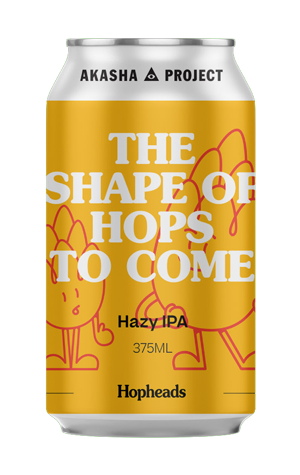 As their Project series continues its beer-a-fortnight schedule, it's clear the team at Akasha aren't in a hurry to confound expectations or throw curveballs. On the back of the Eclipse single hop IPA, Cloud 9 Hazy IPA, and Endless Haze hazy pale, comes another hop driven beer: an IPA with the hazy tag and much of a hazy's character, even if it doesn't actually bring much in the way of haze.

Whether it's a trick of the mind caused by the colour of the cans or not, the triple dry-hopped addition of Azacca, El Dorado and Citra brings to mind ripe pineapple and curd like lemon citrus aromas: yellow in colour, yellow in essence, like synaesthesia in beer form. While haze is low, this collaboration with Melbourne's Hopheads has a noticeable fullness to its texture, plus a sticky sweetness that mutes the bitterness. There's maybe a flicker of the promised pine, but essentially what you have here is a nicely constructed, low bitterness, fruit forward contemporary IPA.