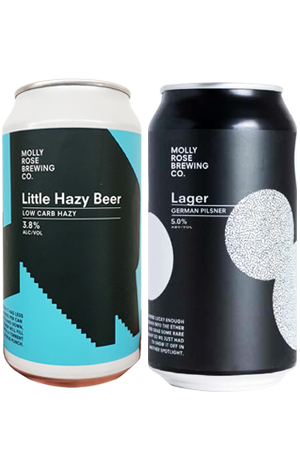 There are plenty of beer styles about which drinkers have made plenty of noise in 2020, yet when it comes to brewers the rise of the hazy pale has got rather more excited. After all, when you live (or brew beer commercially) in a country where the vast majority of craft style beers being sold remain of the pale, hop forward, around 5 percent ABV ilk, what's more likely to sustain your business in the long-term?

Entering the fray in time for summer are Molly Rose with Little Hazy Beer, an offering that does what it says on the tin – it's sub-4 percent ABV and it's very hazy – and is also very pale. The hops create lively, sharp citrus and tropical fruit aromas – lime and grapefruit are prominent, with the brewers talking of "a piña colada and a mango daiquiri in each hand". It's softer in impact on the palate, albeit with a dryness to the finish, making for a refreshing cleanser. Or, as Molly Rose's Nic Sandery puts it: "This beer is going to be our arvo gulper of choice this summer."

Also out in cans for summer is a refreshing cleanser (or arvo gulper) for those of a more traditional bent. When I first tried Lager, it was straight after another European-influenced pilsner and I wondered if there was a little New World hop flourish at play as I detected a light citrus amid the spicy, herbal aromas and flavours. Apparently not, although this homage to German pilsners has been lightly dry-hopped with more traditional varieties. Dry, crisp and with a little bite to the bitterness, it's another that won't last long in your can / glass.