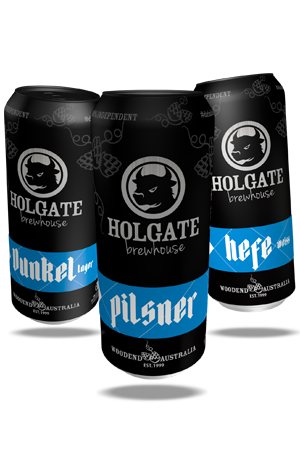 As one of the earliest of Australia's craft brewers, Paul Holgate among a tiny band of people looking to change drinkers' perceptions of what beer was and could be. Throughout the two decades and more since, there have been plenty of times the Woodend brewer has played around on contemporary beer's frontier: they were barrel-ageing beers a decade ago, releasing double IPAs well ahead of IPA's time in the sun, experimenting with bugs and blending early too. But Paul's a traditionalist at heart, whether that's in a fondness for English style beers like his ESB or for other classic European styles.

Head to the Woodend brewpub and, among the rotating taps, there will always be one pouring some form of wheat beer, for example, and he and wife Tash have tended to go big with their Oktoberfest events. So, while it might seem as wantonly anti-trend as you can be to release three old school German style beers at once, it's in keeping with the brewery's DNA, especially in a year when they've not been able to host a Bavarian bash.

That they keep brewing such beers is apparent when you try them, with the Hefe described as "delicious" by a brewery owning mate of mine; it looks as cloudy as it should in the glass and blends ripe banana with a little lemon and sweet, soft, bready malts.

The Dunkel – a dark lager style hailing from Germany's south – pours with a great chestnut colour, a visual indicator of the biscuity, toasted bread crust, and choc-caramel malt flavours that await. There's a little spice in there, the sort you might find sprinkled in a dark fruit cake or in a biscuit served with your coffee, while the finish is neither sweet, nor dry, but somewhere in between.

Which leaves the Pilsner, a beer they used to package regularly but now keep on tap at the brewery and a few other venues instead. Bright light gold in appearance, floral, spicy aromas lead the way, while a bold bitterness cuts through the clean, cracker like malts. Like its colleagues in this triple release, it's not hip, but as Huey Lewis And The News once put it, sometimes it's hip to be square.