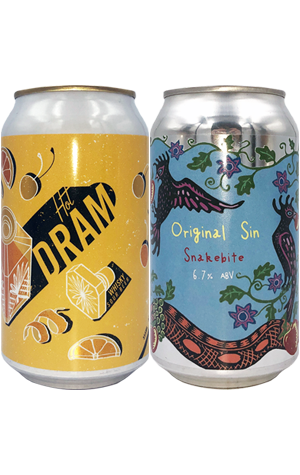 The arch-collaborators are at it again – both Sailors Grave and Blackhearts & Sparrows – with the pair joining forces once more for Hot Dram and the former also releasing a beer-cider hybrid with fellow East Gippsland producers Gurneys.

Hot Dram is a whisky sour-inspired beer: a Berliner Weisse initially split in two – one portion infused with caramelised oranges, the other aged in Starward whisky barrels – then blended. It's a hazy golden pour with just a hint of apricot blush and a fluffy, foamy white head. Aromatic citrus is more prominent than the residual whisky, while there's some stone fruit and floral aromas too. The time in oak and the 5.8 percent ABV add a viscosity, while the combination of the souring bacteria and barrels contribute a welcome, if slight, bracing clip to its wings that feels both tannic and acidic.

The collab with Gurneys is Original Sin Snakebite, which tells you what you need to know: this is a beer / cider blend, albeit one that's rather more involved than the pints you might have knocked back in student days. A 50/50 blend of beer and wild fermented Mutsu, Sturmer Pippin and foraged wild apple juice, it certainly looks more like cider – there's even a hint of pink – and leans more into farmhouse cider than beer territory. Earthy, dry apple juice aromas lead the way, with a touch of (possibly hop-derived) lemon, before a sherbety, boiled lolly sweetness joins the party. One has to assume the base beer was the lightest of ales as the apples, with a touch of acidic grip, take the lead role in what's a typically idiosyncratic celebration of local indie producers.

And all other Blackhearts stores