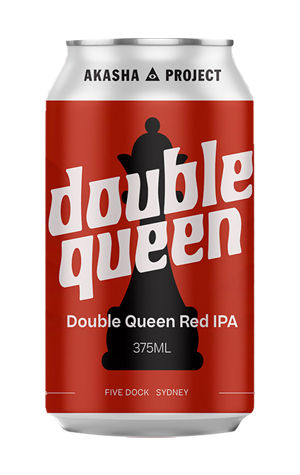 I think it was sometime at the end of 2012 I had my first red IPA. It was Brewtal’s Jack The RIIPA at the original Tippler’s Tap in Brisbane and I was instantly enamoured. To this day, if I ever see a red IPA on a tap list it’s going to be the first beer I get 100 percent of the time. Unfortunately, red IPAs are about as popular as the Reinheitsgebot at a GABS festival so it’s not exactly a common occurrence in 2020.

If there’s one brewery I’d trust to keep the flame alive, however, it’s Akasha. Double Queen started life as the Queen of the Damned Red IPA, a collaboration with the Royal Albert Hotel. But in keeping with the recent Akasha revamp, it’s been rebuilt anew as a double. Akasha are masters at brewing with a big malt bill and creating a final product completely devoid of any unnecessary crystal malt sweetness and the Double Queen delivers once again.

Her Highness pours a deep red/amber with some absolute classic citrus American hop character provided by the Citra and Centennial. Orange peel, grapefruit and pine meld perfectly with the subtle biscuit malt and every so slight honey sweetness. Oily hop resin leads to a long, lingering bitterness and super dry finish making this 8 percent ABV beer every bit as drinkable as something much lighter.