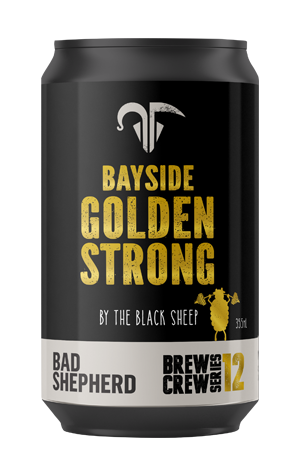 For the first eleven entries in their Brew Crew Series, the Bad Shepherd gave their team members the chance to design a beer with the brewers. It's an approach that's led to some interesting results, from dessert beers to a purple unicorn-inspired release; here, as they notch up a dozen, the doors were (sort of) thrown open to outsiders.

They decided to bring in members of their Black Sheep club, kicking things off with a Zoom call back in May then, thanks to ongoing restrictions, being forced to continue the process from a distance: the collaborators were unable to come to the brewery for tastings, brew day or canning day. They did get to taste the beer early, however, with the chosen style a Belgian golden strong ale, the fourth trad Belgian ale to land in our hands since we ran an article naming such beers as one of a few categories forgotten by the contemporary beer world...

Theirs comes with the addition of lemon myrtle, which we've found can contribute a distinctive, sometimes dominant, character when used in beers. Here, however, it's merely a team player within the 8 percent ABV beer, one in which you'll also pick up gentle spices from the Belgian yeast: cloves; white pepper; a herbaceousness. As much as anything it's the honey malts, which come at you with the manner of a full, sweeter white wine, that demand your attention, before the hops and yeast rein them in for a just about dry finish.