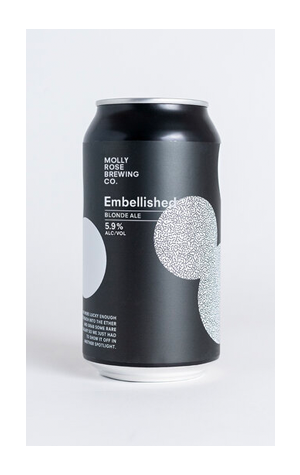 While much of the beer world, at least when measured by decibels, seems to be chasing bigger, hazier, juicier, sweeter, it's reassuring to know there are plenty following their own path (OK, Molly Rose did release a Mosaic heavy juicy IPA around the same time as this trio, but you get what I mean). With these three tins, brewer Nic Sandery looks to the northern reaches of Europe in three different ways.

One sniff and sip of Embellished and I was back enjoying a strong Belgian golden ale with Yves in a brown café off Brussels' Grand Place again. OK, so it's not "strong" but this blonde ale recreates the delightful yeast-driven subtleties of such beers. It's like a bouquet of herbs and spices soaked into honeyed biscuits but with no herbs, spices, honey or biscuits involved.

The name for Resolved comes from Nic's love of aromatic saisons and determination to keep brewing them even though they're a tough sell. Here, the Belgian saison yeast serves up an explosion of bubblegum, floral honey and hay, with its spicy side embellished by the European hops. Vibrant upfront yet dry as anything at the denouement, Nic has vowed to keep brewing such beers "until I go bankrupt", adding: "Fight the hype of sweet!"

You may have tried a Tretti Tre from Molly Rose before, but not this one, with the name set to become something of a banner for kveik beers from the Collingwood brewery. This one features three strains of the yeast with Norwegian origins (imported from a Canadian yeast lab, of course) and dry-hopping with Mosaic, Galaxy and Cascade. It's a combination that delivers a clean, citrus forward hazy pale beer with a little capsicum on nose, a lightly spicy underbelly and a dry yet sherbety finish.