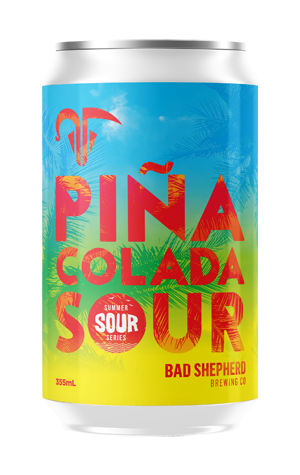 Now, I have to admit, when it comes to choosing cocktails, piña colada is not my thing. Gimme something intense and smoky, bitter and citrusy, lively and rummy, look, pretty much anything else other than a piña colada and I'll be happy. That said, we're objective observers here at Crafty Towers, not allowing personal preferences to get in the way of storytelling and describing. So, to the launch beer in Bad Shepherd's Summer Sour Series...

In simple terms, it's a case of piña colada is as piña colada does. That it’s a sour (but only vaguely) means it’s not as creamy as the cocktail but it’s a close run thing. It feels like as simple and unobtrusive a beer as possible was laid down and all the pineapple juice and coconut they could muster was piled on top.

And yet... when I spotted there was no mention of coconut being added, merely the coconutty hop Sabro, I reached out to the brewery to check if this was an oversight on their part and was told: "No extracts, nothing artificial – just a cool proprietary process involving natural ingredients focused on Sabro hops and pineapple juice." I've no idea what the process is, so let's call it a miracle for now, unless one of you wants to send in answers on a postcard.