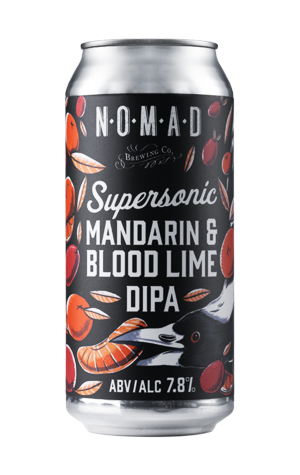 Sometimes citrus is added to a beer to tweak the flavour around the edges, bringing a subtle undercurrent to those discerning enough to notice. In this beer, the citrus isn’t trying to be subtle; it’s more like it’s hijacking a car and taking it for a joyride while you're in the backseat.

Supersonic Mandarin and Blood Lime DIPA is a ride and a half. Both the mandarin and the blood lime (which is a hybrid fruit, derived from finger limes and acid mandarins) make themselves known long before you bring the glass up to your face. However, there’s also also a creamy, almost oaky-vanilla character that smooths out the aroma.

Then, when you take a sip, everything is intensified - the mandarin sweetness amps up; the lime rind sharpness cuts through; the silky creaminess doubles down. It’s like a Splice ice cream on steroids. But before you wonder if is a confectionary suitable for kids, it hits you with a wallop of bitterness with a side of resin, reminding you you’re drinking a DIPA, not a fruit smoothie.

If you like your fruit to sit in the background, keep away. If you want to be rocked with citrus flavour and big bitterness, drink this.