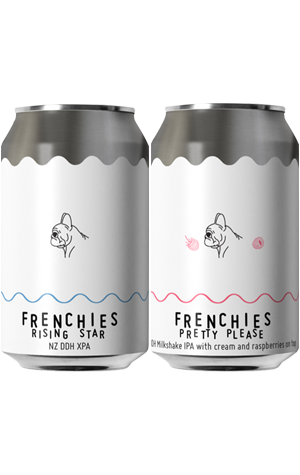 The new beers are coming thick and fast from the Frenchies Bistro and Brewery in Rosebery through 2020. This time around, head brewer Vincent De Soyres has opted to experiment with a brand new hop variety out of Aotearoa and have a crack at a berries and cream inspired milkshake IPA.

Rising Star is labelled as a double dry-hopped New Zealand XPA featuring the hop known as HORT4337 which, let’s face it, isn’t the snappiest of names. Like, I get that horticultural research institutes don’t exist just to give things cool names but, surely, they could at least put a bit of effort in? If you simply must do some sort of letter and number combo, what’s wrong with KICKFLIP69 or DEADLYVIPER420? Absolute amateur hour stuff. [It's called Nectaron in NZ now, but not here yet, and was first used by the Wheaty Brewing Corps in Australia, as far as we can tell – more here – Editor]

Anyway, don’t let the exceedingly lame hop name discourage you. HORT4337’s reputation will likely see it become a mainstay in pales and IPAs over the next couple of years. So far, most of the commercial examples of beers with this new variety have been big IPAs so it’s cool to see how it fares in something a bit more stripped back.

My first impression was a big whack of passionfruit that brought to mind really fresh Pacific Ale. Some real strong Galaxy-esque vibes going on here, for me. However, on the palate there was more peach and pine needles than you would normally get from Galaxy. Low bitterness with clean malt sweetness with a hint of wheat, I really couldn’t shake feeling I was drinking an extra hopped hybrid of Mountain Goat Summer Ale and Pacific Ale.

Alright, cards on the table. As a rule, I don’t really go in for milkshake IPAs. It’s got nothing to do with tradition, or style guides, or pretending I have a sophisticated, mature palate. It’s more just I don’t generally find them fun to drink beyond, say, a few mouthfuls. I can absolutely appreciate the artifice involved but I just don’t really see the appeal of the sweet, bitter and creamy beer.

With that in mind, Pretty Please is a raspberry milkshake IPA brewed with lactose, vanilla, coconut and fresh raspberries. The aromas leave you with absolutely zero uncertainty about what’s coming next. Most notable is a distinct vanilla custard powder note that reminds me of the custard kisses Mum used to make for me as a kid, along with the expected sweet raspberries. The hint of coconut and lactose sweetness comes through but I think what really makes this beer work is the tartness brought on by the berries. It helps to cut through the richness of the milk sugar and vanilla and compliments the bitterness to round it all out. It’s that balance I think might be missing from some of the other milkshake IPAs I’ve tried.

I mean, I’m not about to go out and order a carton, but I drank it all and wouldn’t have been upset to have another. That sounds like a backhanded compliment but it’s genuinely the nicest thing I’ve ever said about one.