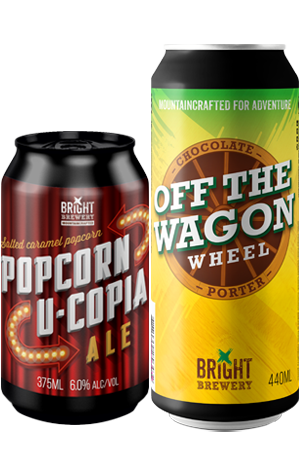 Two confectionary-inspired beers left Bright around the same time during winter 2020, with one also appearing in this year's GABS Mixed Packs. That's Popcorn-Ucopia, destined to be their Festival Beer before the festivals were postponed, and which sets out to bring you salted caramel popcorn in liquid form.

Now, I've got a pretty sweet tooth (OK, I'll consume pretty much anything without a face if I'm honest), but even I approached this with trepidation as the success rate with dessert beers / pastry stouts / lactose IPAs has been pretty hit and miss at Crafty Towers; sure, there have been plenty that do exactly what they set out to, but do I want that from a beer...? This looks like an American amber but get it within two feet of your nose and you know the hops you’d find in such a beer have been replaced with all manner of adjuncts. Seriously butterscotchy aromas and layers of creamy vanilla open proceedings, while to taste it's like putting crème caramel plus creamed toffee and salted caramel ice cream in a blender. Yet somehow, while you'd struggle through a four-pack, it goes down rather more smoothly than all that suggests.

As for Off The Wagon Wheel, we wrote about its debut here but found the 2020 version a little different, with the beer's fruity side certainly more prominent than the chocolate. The nougat and coconut are present as before, but there's a little marzipan too, while the fruit purée adds a tartness that creates the impression of a fruit sour blended into a porter.

NB Mixed cases featuring Off The Wagon Wheel and Rock Paper Scissors are up for grabs for Crafty Cabal members with the ballot drawn on August 19.