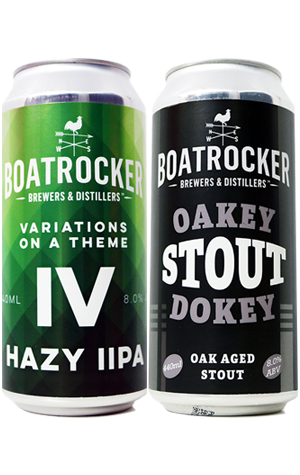 There have been plenty of hazy IPAs from Boatrocker over the past 18 months, to the extent it seems they've given up on finding new names for them. While I've not come across Variations On A Theme I to III, I can confirm that IV†, for which head brewer Matt Houghton spent some time polishing his IPA recipes in an icy Russian wilderness, continues their habit of giving HIPA lovers what they want. From the impeccably solid haze and smooth, gently giving blankets of sweet stone fruit, cream whipped with mango, passionfruit and a little pineapple, through to the flashes of raw hop character on the palate, it's another soft, pillowy, fruity number that you wouldn't think registers at 8 percent ABV.

Oakey Dokey weighs in at the same level too, but is a vastly different beer: an oak-aged stout that's jet black in the glass, yet not as wantonly oaky as the name suggests. Leading the way is plenty of dark choc brownie augmented by some spice, oak-derived vanilla, a little leather and a tannic dryness. Essentially, it's a bold stout with extras, a stepping stone between their standard Stout and Ramjet that sits closer to the former than latter.

† There is no I to III (yet). The choice to start with IV appears to be a nod to the Star Wars, rather than Rocky, series.