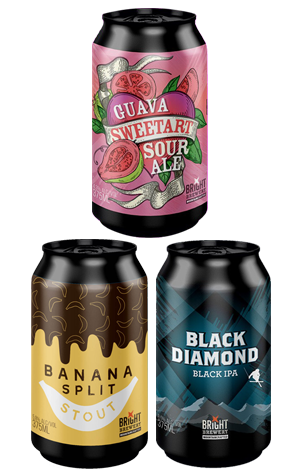 And now for a spot of eclecticism from Bright Brewery... In the pink corner, the latest in their fun fruit sour series is Guava Sweetart. Bright golden and not so much sour as sweet-with-a-cleansing-clip, there's a schnapps-like edge to the aroma of what's otherwise as much tropical soft drink in character as it is beer.

From tropical soft drink to dessert in a glass, namely the old school classic banana split sundae. Here, the brewers have added lactose, vanilla, cacao nibs and 400kg of ripe bananas to the mix and ended up with something that's hard to nail down. Broken into the constituent flavours and aromas, Banana Split Stout possesses a banana character that's both ripe fruit and lolly bananas and a sweet base beer reminiscent of a dunkelweizen as much as a stout. Add in choc chips and you've got the canned beer equivalent of the weirder realms of an ambitious ice creamery's fridges.

All of which makes Black Diamond a return to relative normality. The beer has been around before: a black IPA with the off-black shade of a porter, and hops that blend pithy citrus peel with that herbal character often created when punchy New World hops meet dark malts. There's a rounded and smooth mouthfeel, a drying, earthy bitterness and not a soft drink fridge or dessert trolley to be seen.