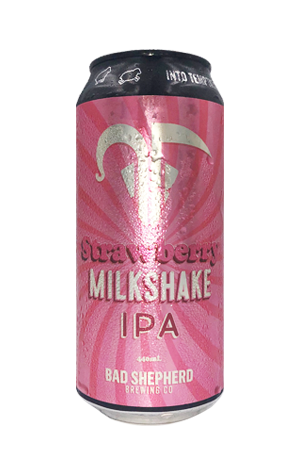 Not only have Bad Shepherd been moving into cans for some time now but, as they make the transition, they've been shaking up the way they present themselves to the world – and on occasion shaking off the relatively austere look of their early years for something rather bolder. Case in point: following the golden ticket-esque Peanut Butter Porter comes this year's Strawberry Milkshake IPA with a look we reckon can be best described as jazz hands.

As for what's inside the spangly can, it's something that conjures memories of a long time and many thousands of kilometres (or should that be miles?) away: jelly trifle complete with custard soaked berry sponge. Using strawberries in beer often gives the drinker a soft, subdued version of the actual fruit's character, yet here there’s plenty of the sharpness on the nose and, to an extent, on the palate that you'd get with chomping down on a berry – even amid the beer's creamy texture. It's less gloopy than the name might suggest, however, with the acid from the fruit and the bitterness from the hops combining to cleanse the milkshake elements, add structure, and allow the vanilla to act as an adornment rather than dominator.