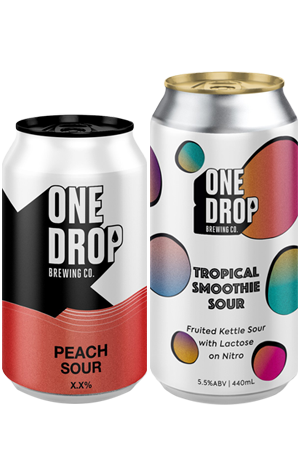 One Drop have a habit of releasing two beers around the same time that are in the same or similar categories, but are quite different. It’s like a game of spot the difference, where we all get to compare and contrast the two. And a fun little game it is.

The Peach Sour is another of their 200 grams of fruit per litre sours, and you can tell it’s packed full of fruit even before you take your first sip; it looks like peach syrup out of the can. There’s a concentrated sweetness on the nose, more like dried peach than fresh peach. But in the mouth, while there’s plenty of peach character, there’s also a sense of this beer being more subdued than some of the previous fruit sours. There’s big tartness up front, but it then pulls back; there’s a hit of sweet fruit, but after a short and pleasant stay, it’s whisked away. Lively carbonation like a thousand pinpricks and a quick transition to an almost spicy warmth in the throat had this beer reminding me somehow of dry ginger ale. And like that refreshing classic, it leaves you wanting more after every sip.

On the other hand, the Tropical Smoothie Sour is about as far from dry as a fruit sour can be. Right from the velvety nitro pour, this treat smells exactly - EXACTLY - like the strawberries and cream lollies of childhood. Sweet and creamy and heady. In the mouth, while it’s still soft and sweet, it’s definitely a sour - expect a spike of acidity and layers of sour peach, apricot, passionfruit and lemon sherbet flavours. The Sabro hops, which in other beers are often the star of the show, remain in the background until your palate has accustomed to the sourness. It’s only then that they revel in the smooth texture and roll in the creamy lactose sweetness.