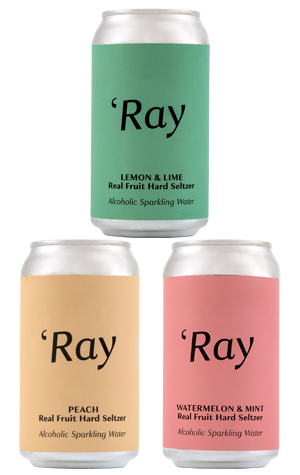 Remember that time when the arrival of hard seltzer on these shores was a matter of lively discussion for many? Back when things live music and sport were still a thing. Feels like a loooooong time ago, yet it's actually only 78 days since we published The Alcopopalypse Cometh. The boozy pop offerings continued to come, with Hop Nation joining the party with no less than three – all named after their home 'burb of Footscray – and with the promise of heaps more to come by summer, assuming that's not cancelled too.

According to head brewer Duncan Gibson when we chatted to him on The Crafty Craic, there was plenty of trial required to get to where they are for the opening trio, each of which contains fruit, hops (to the indistinguishable level of 5 IBUs in bitterness) and pours crystal clear, like sparkling water. And what they've ended up with is a trio of easy-drinking, light and fruity soft drinks that will get you steadily tipsy if you crack through a few.

Lemon & Lime is possibly the most obviously soft drink like of the bunch, reminding me of the lemonade and lime cordial drink (without the green tinge) I'd gorge on as a kid with my grandad as he enjoyed his bitter lemon (whoever I got my fondness for beer from, it wasn't Bill Rutherford). Peach is the most subtle, with the fruit coming across rather like a sweet peach schnapps without the heat and lingering after the spritzy carbonation does its dance of refreshment across the palate. And Watermelon & Mint – apparently the toughest one to create – is the bolshiest, with the sweet fruit character taking it furthest into fruity soft drink territory.

They're all there to be drained without draining your grey matter, they're crisp and fruity, their rise still baffles me, we don't have a means of indicating their appearance via the colour scheme on this page, and they'll help Hop Nation achieve a core range of 100† within a year.

Note: there may be other hard seltzers released by Hop Nation, but we won't be writing about them. We're happy to let readers know which breweries are playing in this space, but we're a beer website and need to focus our attention on the diverse array of beers being released.

Available from their online store