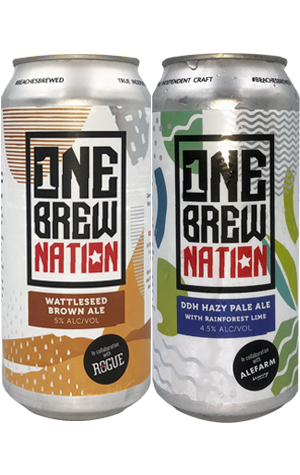 We all know the old axiom: “It’s not what you know; it’s who you know”. When it comes to collaborations, the Nomad team have always taken advantage of the contacts of their sister company ExperienceIt Beverages to get together with world renowned brewers. Their new One Brew Nation series is a celebration of these beers: “One time, one place. The world’s best brewers coming together to brew phenomenal beers, and just one brew only!” The distinctive design on the cans is a nice touch, splaying visual textures across a white background like ambient jazz playing in your favourite café [This is assuming you're a fan of ambient jazz! – Editor].

The first cab off the rank is the Wattleseed Brown Ale, made in conjunction with Rogue Ales & Spirits. Back when Aussie craft beer was in its younger days, and almost no self-respecting Australian would touch a brown ale, this writer remembers being able to pull a tallie of Rogue’s Hazelnut Brown off the shelf of a specialist bottle-o to enjoy the smooth vibes within on a cold night. Since wattleseed has a nutty flavour (apparently - I must confess to never having chomped down on one), Nomad and Rogue made this beer as a sort of re-creation of Rogue’s Hazelnut Brown Nectar.

While this brew uses Aussie and NZ malts and native Australian wattleseed, it retains something of Rogue’s American coolness - that easy, relaxed, James Dean casualness. But there’s certainly an added complexity: the aroma dances between simple hot chocolate and an intriguing sweetness, perhaps of red wine or maple syrup. In the mouth it delivers up the classic brown ale flavours of toast and nuts and cocoa and love (can you tell I enjoy a good brown ale?), with a touch of coffee bean bitterness on the finish. I must say, I have no idea what wattleseed tastes like, but Nomad’s part in this collaboration on an already great beer has made it even more of a winner.

The next in the series is the DDH Hazy Pale Ale with Rainforest Lime. Again, this is a meeting of two breweries bringing their best to the table: Danish brewery Alefarm tout “modern hoppy offerings” as one of their main focuses, and Nomad’s love of Australian natives is here represented by zingy rainforest lime.

On the eyes, there’s a lemony yellow haze; on the nose, lime; on the tongue, softness. While it’s double dry-hopped with Vic Secret, Mosaic and Sabro, this pale doesn’t spray you in the face with its hop character. It’s more like sliding into a pool at the perfect temperature, and being enveloped with comfort, the fuzzy Sabro around the edges bringing a coconut and cedar woodiness to level out the fruity notes.

If these two beers are anything to go by, the One Brew Nation series is going to be a crowd-pleaser.