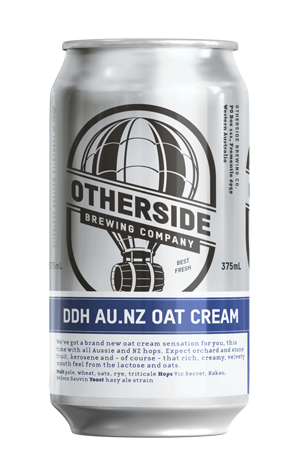 After the success of their original Oat Cream IPA, Otherside return with a Trans-Tasman hop trio edition featuring Vic Secret, Rakau and Nelson Sauvin. While some may be questioning yet another riff on the world of the haze – "Oat cream IPA, you say??", the majority of punters seemingly couldn't care less with pre-release online stocks devoured from the brewery's new webstore, and the remainder lasting mere days in retailers.

Those able to grab a can of the experimental release will find a suitably smooth, lactose-imbued, protein rich base through which peach, over-ripe pear, apricot, subtle pineapple, mango and wine likes notes float, with some welcome booze presence and more to be discovered within an incredibly cohesive beer.

Available in limited release from the brewery and Otherside stockists. Until it’s not.