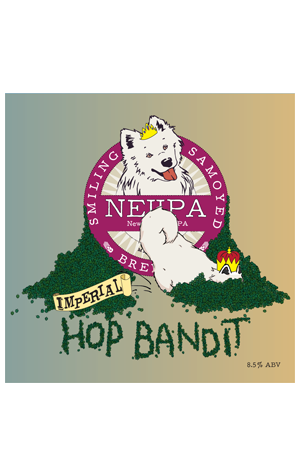 In late 2018, Smiling Samoyed released their first NEIPA, calling it Hop Bandit. Two years on, when the team sat down at the brainstorming table to devise ideas for a new limited release, they landed on the idea of bulking up the Hop Bandit and sending it into imperial territory. A clutch of hops were thrown in, including Amarillo, Citra, Vic Secret, Ella and Enigma, balanced by pale ale malt, rolled oats and wheat.

The hop combo lashes out instantly as soon as the top is cracked. The aromas take on several tropical fruit nuances, with fresh, juicy papaya and mango doing most of the the work. It takes on a hazy light orange colour and but isn't murky. The juice train continues upon the first sip with again the papaya and mango hitting hard, followed by a touch of apricot and some biscuit malt right at the end.

There's a touch of bitterness that works in well with the sweetness and a mouthfeel that's slightly creamy and full, resulting in a bandit that's balanced and rounded.