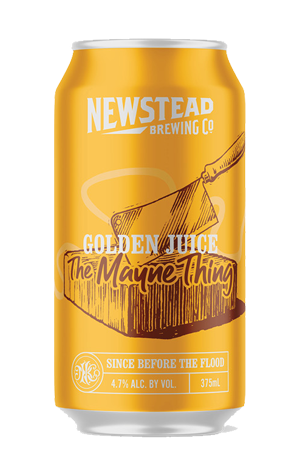 Newstead's core range beers are named after stories from Brisbane’s history, including Mayne Thing. But Mayne Thing is developing quite a history itself - to better service their customers, Newstead revisited it first to change it from a golden ale to a golden lager, and now to change it from a golden lager to a hazy pale ale. They’re not calling it a hazy pale ale, though; apparently the new style names of hazy or juicy pale ale aren't new enough for Newstead, who took this historical beer and straight up declared it to be a new style called “Golden Juice”, which is admittedly an apt description.

It's a world away from the lager it was before, pouring a cloudy gold, almost like egg yolk. This juiced-up pale is a blast of tropical fruit and orange on the nose, but tamer on the palate. It’s fluffy and light in the mouth, with subtle malt carrying the hop characters along until you reach the gentle bite of bitterness in the back end.

Newstead’s drive to keep up with our rapidly evolving tastes is commendable, and I’ll tell you what: this beer ain’t half bad either.