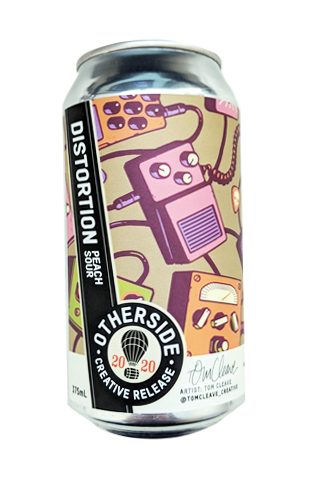 1940s blues artists, notably Junior Barnard, are credited with popularising guitar distortion by turning their amps into the red zone and using blown valves to achieve a unique, gritty tone. In the 50s, Link Wray poked holes in his speaker cones to achieve distorted sounds, which also landed him the prestigious achievement of creating the only instrumental song ever banned by US radio; broadcasters believing his distorted guitar sound on Rumble would incite gang violence – it’s now in the Rock n’ Roll Hall of Fame.

Dick Dale Surf Rock’d with it, the Stone’s kickstarted a career with it but still couldn’t get no satisfaction, Floyd went into Interstellar Overdrive and Sabbath revelled in it and, by the 90s, My Bloody Valentine bankrupted an entire record label with it. Distortion was for outsiders, creatively pushing things forward, so it makes sense that Otherside – a brewery entwined with music, culture and arts – would launch 2020’s Creative Series release with Distortion Peach Sour.

Here, Peach Sour’s distortion is visual density and implied peach fuzz rather than an aural Wall of Sound. There is no mistaking the peach either: it’s plump and almost Weiss ice cream bar like, with fruit tartness pairing with the approachable sour profile. For maximum fruity expression, our tasting recommendation is to play your favourite distorted 90s tracks exceedingly loud, pour half the can into a glass and then swirl the remainder in the can before topping up the glass.

In line with the theme, Distortion 2020 also features the work of artist Tom Cleave, who won a $1,000 Tapped by Otherside grant plus at residency at Freo.Social, for his submission, which evokes 90s guitar pedal experimentation.