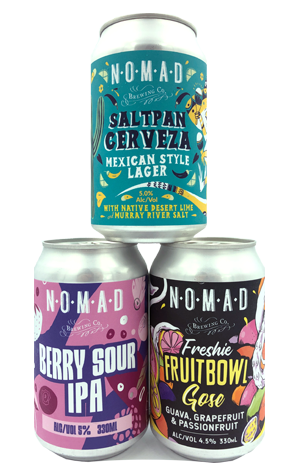 The first of this trio of limited releases from the prolific Noman brings more than a bowl of fruit - it brings a veritable Mariana Trench of the stuff. Thick passionfruit is the dominant aroma that squeezes into your nose, but the guava is hardly camouflaged. As you begin to sink this cephalopodic beverage - or rather, as it begins to sink you - a touch of grapefruit acidity shows itself. The salinity and the low carbonation make this beer a creature of the deep, disappearing below the surface in an instant, never to emerge again.

If the above squid-based descriptions seem out of place in a beer write up, allow me to give you context: the Freshie squid is wrapped around the label, crushing the various fruits in his tentacles. And if I’m being honest, I think reckon he’s got the right idea. Freshie Fruit Bowl Gose is there to be crushed.

While the first beer contained guava aroma, this beer seems to have stolen all of the guava’s colour. Of course, Berry Sour IPA’s tone isn’t from guava - it’s the blend of blackberries, blueberries and raspberries that gives the cloudy dark pink hue.

Berry sweetness, raspberry acidity, and hoppy fruitiness all rise out of the glass. When you actually raise the beer to your lips, you’ll find it starts on the berries, releases hop flavours in the middle, and finishes on the lactic, with a sourness and bitterness that lasts and lasts. But don’t expect the individual elements to separate out neatly - this a complex blend of flavours that renders adjectives inadequate. This is one to experience for yourself.

And then, when you’re ready for something simpler, Nomad has a palate-cleansing lager for you to reach for. Mexican lagers, scorching hot days and salty corn chips go together like Steve Martin, Chevy Chase, and Martin Short. Saltpan Cerveza brings together its own three amigos - malted maize for its light colour and body, Australian native desert limes for a hint of zest without approaching sharpness, and Murray River salt to balance out the lime. Between its sweet nose and super clean finish, don’t expect a four-pack of this to last you too long.