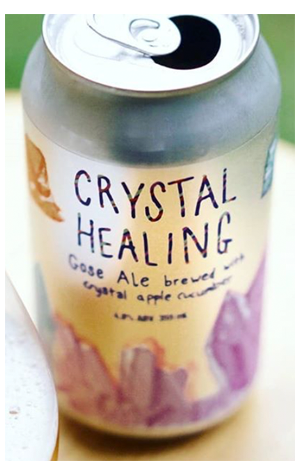 Crystal Healing first appeared in March 2019 and, when it did so, came in two formats. There was the collab with Stomping Ground and Little Latin Lucy, a gose featuring crystal apple cucumbers, then the canned version that went further afield and featured additional ingredients in the form of karkalla (pigface) and prickly pear. The former wasn't seen outside the venues and the odd event, but now it's back and in cans.

The karkalla-and-prickly pear-less version retains that wild, windswept, rustic aspect front and centre, complete with a suggestion of herbal sweetness if you dig deep enough. As for the fruit that survived the cut, they're little round, juicier cucumbers that were popular in Victorian times and something of a rarity today. Given my experience with them is limited to Crystal Healings, I'd hate to make too many claims about their impact, but if memory serves this release is more vibrant on palate than the cans sampled in 2019 – instantly tangy and quenching, giving the palate a workout from front to back, side to side, and all without presenting anything obviously beer like.