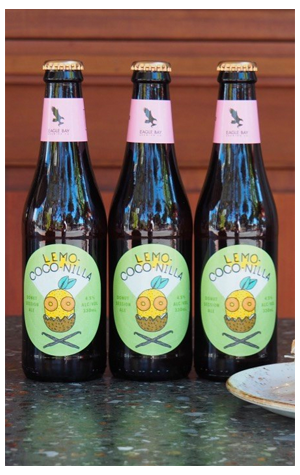 Eagle Bay have been collaborating again, with a pair of new releases leaving the WA brewery as spring turned to summer. One goes under the moniker of a donut session ale, with Lemon Coco-Nilla a coming together of two of the greatest food groups on the planet: beer and donuts. Brewed with Perth's cult bakery-cum-café Mary Street Bakery, this intriguing ale is brimming with bold flavour, intrigue and pastry sweetness.

Brewed with actual MSB cinnamon donuts, along with more than 10kg of toasted coconut and a heap of lemon zest, first to jump from the glass are sweet spice and bready aromas. Lemondrop hops add to the juicy citrus flavours and pair with roasted coconut and vanilla. Tasting notes are comparable, though an added malt sweetness and a hint of mixed spice offer reminders of sweet, sugared donuts. A sessionable 4.5 percent ABV and a moderate body boost the drinkability of this curious but well executed pastry-based ale.

The second collab features Melbourne's 3 Ravens and takes the shape of a Refreshing Ale. Increasingly known for beers of intrigue, the 3 Ravens brewers brought their East Coast flair to the coast to knock out a summer quaffer that features Australian blood limes, finger limes and mountain pepper leaves.