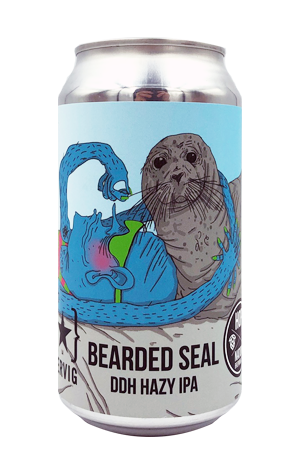 One boon for Aussie brewers when events like Moon Dog's Mate Fest bring guests to town from across the globe is the opportunity it opens up for collaboration. Hop Nation leapt at that opportunity, welcoming Mike Murphy, the American behind much-loved Norwegian brewery Lervig, to Footscray and setting about creating the sort of beer fans of both brewers crave.

The Bearded Seal – named after the heavy set creatures found in Norway (and featured in odd embrace on the labels) – is a DDH Hazy IPA. But it's more than that too; the addition of mango, passionfruit and pineapple move its appearance beyond mere haze and into full on breakfast juice territory. If you spotted bits of shredded fruit floating within, you probably wouldn't be surprised given its dense opacity.

It's as intense as it looks too, with deep mango and tropical aromas allied to a prickly palate, a potent, drying bitterness and a hop presence that moves beyond the fruity to create the sense you might actually be consuming actual hops, plant matter and all. Like a cuddle from a Bearded Seal, it's not for the faint-hearted.