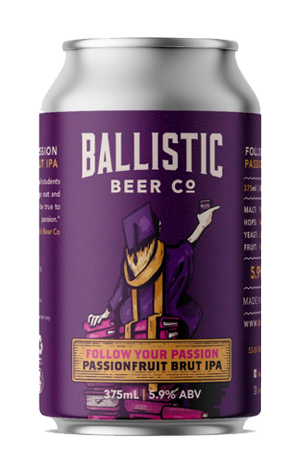 “In honour of my daughter and all students graduating this year. As you go out and make your mark on the world, be true to yourself and follow your passion.” - David Kitchen, founder of Ballistic.

The Aussie beer industry generally doesn’t take itself too seriously, often turning to jokes and puns and parodies for beer designs. But once in a while someone introduces some sentimentality. Ballistic founder David Kitchen has just watched his daughter graduate from university, and so the brewery made a celebratory Brut IPA with passionfruit to honour her following her passion (even sentimental beers like a pun).

The passionfruit is bright on the nose but not overwhelming, joining amicably with stonefruit hop aromas. It has a similar relationship with the hops on the palate - friendly, boisterous even, but not domineering - bringing a touch of tang but not the tartness often associated with passionfruit. The fruity burst gives the impression of sweetness while the beer remains dry, and there’s plenty of body and even a slight booziness to enjoy, but the beer stays at a relatively modest 5.9 percent ABV. And, as it winds up, the passionfruit fades away, and is replaced by an almost white wine character and some citrus pith bitterness.

And other Ballistic stockists