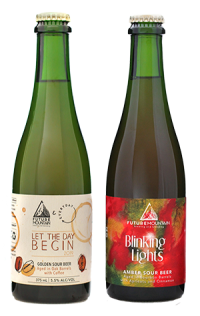 Future Mountain only launched earlier this year but already they've shown themselves to be an essential local for anyone in Reservoir with even a passing interest in beer and a brewery to watch for fans of delicate but complex barrel-aged beers. These two releases from the brewery might have different occasions in mind but both show the team’s ability to meld detail and drinkability together in one bottle.

Let The Day Begin is something of a weekend brunch beer: a golden sour infused with coffee beans from Collingwood’s Everyday Coffee. If you’ve tried Future Mountain’s golden sour Alameda, the base of this beer has a similar mix of funky stone fruit and a wine-like quality. But, if you’re expecting the roasted hit of espresso to leap out of the beer then you’ll be disappointed. Instead you’ll find lighter, more fruit-driven and floral notes more in tune with a well-made filter coffee. Cherry was the prominent character we found and, while the coffee flavours built over time, it’s still a deft touch against Let The Day Begin’s gripping sour finish.

Blinking Lights is made with lunch, Christmas lunch in particular, in mind. By bringing together spice and fruit in a sour amber beer, it's a beer that would aptly fit the balmiest of Australian Christmas Days too. The base beer spent four months in oak before being transferred to Buffalo Trace bourbon barrels for two months alongside apricots from the Yarra Valley, with a housemade tincture of cinnamon also added. It’s a long process and one driven by the idea of bringing together seasonality from the apricots with flavours you’d more likely associate with Christmas. Like the beer above, the amber base comes to fore first, before being followed by a fruit cake-like apricot flavour. Dig a bit deeper and you’ll find the cinnamon spice and a burnt sugar, slightly caramel mix from the bourbon barrel.

Both beers are launching at the brewery on the weekend of Nov 29 to Dec 1. On Sunday, Future Mountain and Everyday Coffee will be pouring the beer at their respective homes, along with bacon and egg rolls at the Collingwood café and pastries at the Reservoir taproom.