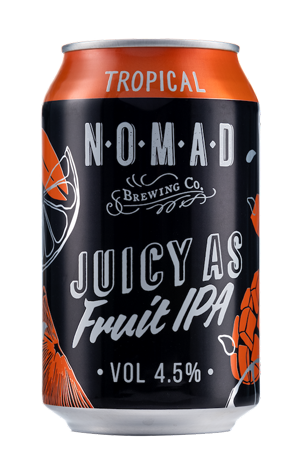 It used to be that adding fruits and other adjuncts was a game for sour beers, 7 percent-plus IPAs, and imperial stouts. But with the increase in demand for lower ABV beers with flavour, a number of brewers are starting to play in the low-ABV-beers-with-adjuncts space. Many of these brewers are just exploring this trend for the first time, but the crew at Nomad Brewing have been playing there for quite some time now.

One of their offerings is Juicy As, in which Nomad have taken their already quite fruity 4.5 percent session IPA and added blood orange and mango. On the nose, there’s a heady waft of orange and an undercurrent of sweet mango - enough to make you brace yourself for a fruit bomb as you take a sip. But the fruits are much less obvious on the palate, blending with the citrusy and stonefruity hops and getting caught up in a jar of 65 IBU marmalade.