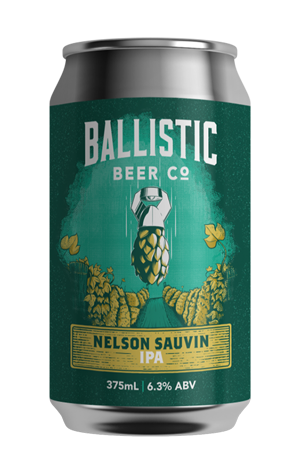 People say the parallel lines of vineyards make for a pleasant view, but I’ll take rows of hop bines over grape vines any day, and I guess the folk at Ballistic think the same way too. They’ve given a facelift to their series of Single Hop IPAs, with the tinnie labels now showing a hop bomb dropping between rows of rising hops. The series is designed to help you recognise and appreciate the nuances and characters of one particular hop at a time… but, if we’re being honest, we mostly just drink them because they’re stellar IPAs.

The first in the series to bear the shiny new label is the Nelson Sauvin IPA. This is a West Coast style IPA that oozes pine resin, but unlike many of the piney IPAs that hit Aussie shores in the early 2010s, the Nelson Sauvin also brings a fair whack of fruitiness. Sweet, sticky mango and paw paw join the piney character, but differently to how they might come through in what you’d generally call tropical IPAs; they’re restrained like they’re behind coloured glass, or as though they’re trapped in amber à la Jurassic Park.

Nelson Sauvin is a hop variety with a truckload of complexity, and you’ll find notes of citrus, spice and earthiness make themselves known before the bitterness comes along for the ride, and settles in for the long haul.