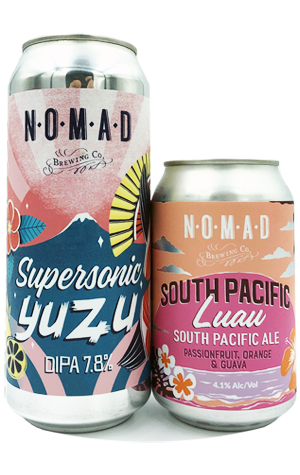 When it comes to botanical additions to beers, Nomad often goes in a distinctly Aussie direction. But these two releases from the brewery are designed to give Australian drinkers a taste of other lands. So, take a sip, close your eyes, and let the flavours whisk you far from home...

With South Pacific Luau, Nomad have taken their South Pacific Dream a step further - or rather, three steps further - by adding passionfruit, orange and guava into the mix, turning the South Pacific Ale into a full-on Hawaiian hula. The fruits take turns dancing in front of your nose - first the passionfruit comes in for a shimmy, bringing a powerful breeze of Passito; next, the guava saunters in for a shake; and finally, the orange sidles up to you, perhaps more shy than the others, but having just as much fun. In the mouth they join together, dancing lighter on the tongue than they did in the aroma, but more refreshing than if they carried the energetic sweetness the aromas suggested. The beer finishes with the tiniest hint of bitterness and tartness, like a single hibiscus flower breaking off, floating to the ground, and landing on the sand as the sun sets below the horizon.

With Supersonic Yuzu, Nomad head west from Hawaii, crossing the Pacific until they reach Japan and grab hold of some yuzu. This fruit from the Land of the Rising Sun has been rising in popularity recently, with a number of Australian brewers using it in their beers for its potent citrus flavour. The beer is a deep rusty copper - the colour of a glowing sunrise, perhaps? - and fills the air with a cocktail perfume rush of citrus rind, red toffee apples, and pomegranate. You can even smell the bitterness that’s ready to envelop you, no doubt a mix of the yuzu and the orangey Lotus hops. But caramel malts balance out the intense zest and pith and bitterness in the mouth, and a boozy warmth brings heat to the throat like a sip of sake.

This one’s definitely a beer to sit with for a while, but that gives you all the more time to appreciate the label on the can - the sun rising behind Mount Fuji, Maggie dressed as a geisha, shining silver bamboo, and even a patina texture to run your fingers over.